Pet of the Month: Oscar

Little Oscar Liew is a familiar face at Markham Veterinary Clinic. He has been visiting us frequently since he was a tiny puppy for his vaccine boosters. His gentle, happy nature and excited tail wag when coming in makes him very popular here at the clinic!

One winter day we got a worried call from Oscar’s mom. They had just been out for a walk when one of Oscar’s balloon boots fell off and he decided it would make a good mid-walk snack and swallowed it!

Thankfully, Oscar’s family was able to take quick action and bring him in right away. Because it had just happened, we knew there was a good chance the bootie was still sitting in his stomach. Oscar was offered a little snack of canned food to help coat his stomach followed by an injection to help him throw up. We crossed our fingers and waited.

A minute or two after receiving the injection, the medication kicked in and Oscar brought the entire balloon boot back up! Dr. Leung ran out to show Oscar’s mom and they both jumped for joy.

Had it been an hour or two longer, the balloon boot would have tried to move into the intestines, potentially causing a life-threatening blockage. Thanks to quick action and recognition from Oscar’s family, a crisis was averted.

Oscar was a little sleepy after the injection but back to his rambunctious self in no time! 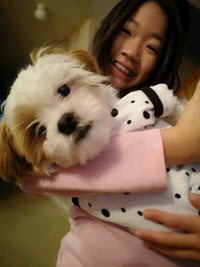